Best Places to Live and Work as a Moviemaker 2015: Top Five Towns

Located half way between San Francisco and Portland, Ashland benefits from Oregons incentives: a cash rebate of 20 percent on goods and services and 16.2 percent on labor spending over $1 million. Indies, take note: Five percent of Oregons incentive fund is earmarked for indigenous low-budget productions between $75,000 and $750,000. And while housing is higher than the Oregon average, apartment rentals are still below $1,000and theres no state sales tax.

Home to talent like actor Bruce Campbell and directors Alex Cox and Gary Lundgren, Ashlands film industry is a big focus within its vibrant, artistic culture. In June 2014, the City of Ashland gave the Southern Oregon Film and Media office (SOFAM) a $7,700 economic development grant in recognition of growing contributions to the local economy. Education is a significant avenue for growth: Besides programs at Southern Oregon University and the Southern Oregon Digital Media Center, even the Ashland Middle School has a media lab with 10 cameras, 20 editing systems and an in-house TV studio with a green screen, pedestal cameras, and a lighting grid. As Robert Arellano, a film professor at Southern Oregon University, told us, many of his students go on to take part in the Ashland Independent Film Festivals LAUNCH student program every year. 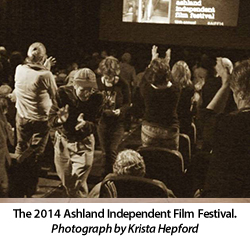 Ashland is indeed a forward-thinking town. In late 2014, Google named Ashland Oregons eCity Digital Capital for the second year in a row. With advantages such as the city-owned fiber optic network, said Gary Kout, executive director of SOFAM, the second wave of film creation and innovation in Ashland will come in the world of post-production, as local filmmakers take advantage of its tremendous digital culture and fast pipeline.

What about locations? If you cant go to New Zealand, come to Southern Oregon! said filmmaker Courtney Williams, who lists woods and forests, wild flower meadows, otherworldly dunes, the coast with its dramatic cliffs, rivers and rapids, and mountainsides as the regions picturesque landscapes. After all, Ashland has 785 acres of parks. You can create multiple worlds in multiple time periods here. And the Oregon Shakespeare Festival repertory company can outfit those erastheir collection rivals Western Costume!

Productions shot in Ashland in 2014 include Courage of Two, By Gods Grace, Brothers-in Law (produced by Lorne Michaels), documentary 5 Women, and Gary Lundgrens Black Road.MovieMakers special events coordinator Jeffrey Star, who worked on Black Road as a PA, waxes lyrical: The entire community banded together to support our small crew, in the form of donated meals, services, and locations. This was small¬town filmmaking at its finest. MM

This article appears in MovieMakers Winter 2015 issue, available on newsstands on January 30, 2015, and for digital download from iTunes on January 24, 2015. Illustrations and lettering by Nicole Miles.

Read the 2014 edition of our Best Places to Live and Work as a Moviemaker list here.